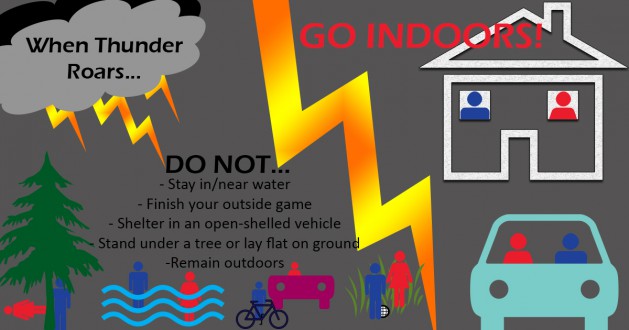 Summertime brings about boating, camping, festivals, cookouts, and many other recreational activities – OUTDOORS. Although a lot more people enjoy the great outdoors during the summer, this season also brings about one of the nation’s deadliest weather phenomena – lightning.

According to the National Weather Service, “Lightning is one of the most erratic and unpredictable characteristics of a thunderstorm. However, knowing and following proven lightning safety guidelines can greatly reduce the risk of injury or death” (www.weather.gov/iln/lightningsafetyweek).

The warm and humid climate of the Southeast makes its states more susceptible to thunderstorms and ultimately lightning strikes. The “Top 5 Lightning Prone States,” according to The Weather Channel (www.weather.com) are:

With a regular occurrence of thunderstorms, it is important for residents and visitors alike to be aware of the dangers and myths associated with lightning strikes. Lifeguard Ambulance would like to
provide some warnings and safety tips in regards to lightning strikes in preparation of the National Lightning Safety Week (June 24-30) and as part of their “Summer Safety Series.”

Plan ahead for outdoor activities:

If caught outside with no safe shelter nearby:

If you see someone struck by lightning, call 9-1-1 immediately for medical assistance. If the victim is not breathing, begin CPR, as starting CPR may be critically important to saving their lives. Other
victims may not require CPR but still need medical attention.

Temperatures are on the rise and things are heating up quickly!

Summer Temperatures + Heat Index = Danger Zone
especially if an infant, child, or other person is left in the car

How to have a Fang-Tastic Halloween, safely